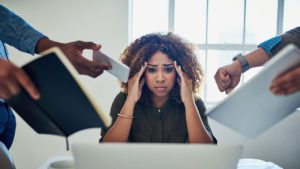 Adeyemi, just like many other Nigerians, accepted a job offer in an advertising agency somewhere in Lagos. It wasn’t his dream job but he was at least satisfied that he had a job and was earning a living. The anticipation of a salary made him sign the contract letter. Months into the new job, Adeyemi realised that every information he had gotten about his new job was spurious.

Issues began when the management brought in a new head of Human Resources who made a few restructuring; his salary was delayed on multiple occasions, his leave period was reduced, more workload was added to his job description and there was constant pressure for him to deliver from his controlling line manager.

“After a few months into my new job, the management introduced some new workplace policies that had people’s salaries deducted unnecessarily. Eating in the workspace also attracted a fine although no coffee room was provided. It got really intense that the head of Admin usually goes to all departments with a list of all employees to confirm if we are present or not.

“The HR manager calls your name and you answer just the way teachers mark the register in secondary school, even after we have used the biometric attendance machine. You become her target if she doesn’t like you. I can’t say the same for people who became friends with her to escape the troubles. She had become so power-drunk that it was no longer conducive and was affecting my productivity.”

Adeyemi explained that after several complaints from staff, the management in their defence said these policies were put in place to deliver on their job as the company has failed to hit its sales target.

Adeyemi’s story is not in any way unique, as sizable numbers of Nigerians have had their share of experience. Many are cornered by the relentless rise in unemployment and the anticipation of a salary makes them keep their jobs without a second thought.

“I was just hired as a digital marketer at this particular Digital agency in Lagos, at least that’s what my employment contract said, but in less than two months, I found myself slowly coerced into covering roles of an administrative officer and other roles beyond my job description,” said Busayo.

“Working hours were supposed to be from 9 a.m. to 5 p.m. on weekdays, but I soon found myself working on weekends, too. There were many days where we were made to close by 9 p.m., and sometimes I would receive instructions to go to the market to shop for items.’’

Just like many Nigerians, Busayo found a way to cope. She did everything humanly possible to hold on to her job, even when faced with inhumane conditions with ridiculous yet non-negotiable targets she had to meet, all before she was laid off.

“One evening, I closed from work and was on my way home. Mind you, the closing time on my contract was 5:00 pm. My manager called me to come back to the office. I told him I was closer to my house than I was to the office, and as such, I couldn’t turn back. He told me to never come back to the office again, and the next morning I got an email saying my desk had been cleared. My outstanding salary has not been paid to date”.

Research has established that workspace culture turns toxic when the leadership does not observe or ignore the signs that something is amiss and that might negatively influence the psychological well-being of their workers. Everything rises and falls on leadership; hence, leadership always sets the tone of the workplace culture.

Research by psychologists, Nathan Brooks and Dr Katarina Fritzon of Bond University and Dr Simon Croom of the University of San Diego, found that around one in five bosses is a psychopath in the upper echelons of the corporate world.

In another report by workforce consulting firm “Life Meets Work”, 56% of employees endure toxic leaders and their venomous behaviours leading to an obnoxious environment.

Addressing this, Business culture coach and DEI specialist, Bisi Alimi said, “Toxicity in the workplace is solely the responsibility of leadership. I know many people will argue that the team and reports also have a role to play, but the reality is that a team is as good as the person leading them. One of the biggest examples of toxic workplace culture is favouritism. Many leaders find themselves in the position a lot of time without realising it’’.

Human Resource expert George Kweku also noted that “Leadership/Management can contribute to toxic workplace culture by introducing policies that are not favourable to the sector in which they operate. This can happen as a result of a certain leader wanting to incorporate work cultures that are foreign to their own sector with the justification of ‘that is how it is done in other sectors.’”

In a country like Nigeria, the essence of leadership is more directive than collaborative, and power usually is performative. The combination of these leaves Nigeria’s employees at the mercy of their managers and employers. How many employees are even aware of their employment rights, particularly regarding compensation and wrongful dismissal? In reality, not many.

Work environments thrive on control and exist in a constant state of disaster. This situation is detrimental to the company and other employees, including those who are not directly targeted. Co-workers are distracted by politics, gossip and by choosing sides in the ongoing hostility. This can result in a decrease in productivity and a diminished ability to devote time and attention to the achievement of business goals.

Where does coaching come in?

In Nigeria, coaching is hardly a part of HR’s culture for professional growth and positive leadership styles. When conversations about the mental and physical wellness of employees are brought up, coaching rarely comes up. However, the opposite of a toxic culture is a coaching culture.

According to Alimi, “Coaching as a tool to support business and individuals provides opportunities to see the blind spots and take immediate action in the interest of all the parties involved. In developed markets, business and executive coaching have now become part of the business culture and increasingly so, we are seeing results. Every human being has the potential to deliver on the job. That said, every human being needs the support to do exceedingly well, and this is where coaching comes”.

“There have been many assumptions about who needs coaching and at what level it should be introduced. What I know for sure is that everyone from entry-level to C Suite executive levels needs coaching for high productivity.”

Leadership coach and senior director of marketing at Sounding Board, Kip Kelly, reaffirms this

Research has established the fact that leadership coaching can significantly shape the company culture. “Coaching can help business leaders establish and reinforce positive behaviours that support the culture. Through coaching, leaders can also glean how some behaviours may detract from the culture while providing guidance to change these behaviours. If culture is the shared, everyday habits of an organisation, then leadership coaching can make or break these everyday habits”

Lanre Olusola, the Founder and Chief Catalyst at the Olusola Lanre Coaching Academy, in his article titled “Importance of coaching for Human Resource Professional stated, “Coaching provides an invaluable space for personal and professional development. In the professional sense, working with a coach can give employees the edge needed to improve their work skills, discover their strengths, and achieve organisational goals through peak performance”.

He added that HR managers should embrace internal coaching as this would cause employees to be more resilient, especially in their approach to work, self-confidence, and assertiveness in the workplace.

In a recent survey carried out by the Institute of coaching at McLean, Harvard Medical School Affiliate, 80 percent of people who receive coaching reported increased self-confidence, and over 70 percent benefit from improved work performance, relationships, and more effective communication skills.

According to the World Health Organisation (WHO), mental health in many parts of the world is still not acknowledged and remains a low health priority. Research has shown that the number of suicides and suicide attempts across Nigeria surge from a rate of 0.6 per 100,000 people among those fourteen years and younger to 6.9 per 100,000 people among those aged fifteen to nineteen years.

The conversation around mental health awareness has been slow but gradual among Nigerians. With non-governmental organisations now emphasising the need to be more aware of mental health while also connecting them to professionals.

However, this recognition is yet to find its way to the corporate environment, where there is still very little mental health awareness, and some who may have hinted at mental health struggles have been accused of being mentally lazy.

A study by Mind found that 30% of employees wouldn’t feel comfortable talking to their manager about feeling stressed, whilst 42% had considered handing in their notice because of workplace stress. 21% of individuals stated they’d called in sick to avoid work during times of stress.

The great resignation is in full swing. According to the report published on InAfrica, toxic culture is the most significant predictor of employee resignation, characterised by discrimination, sexual harassment, verbal abuse, and poor work-life boundaries. Defining the company’s overall vision for the approach to mental health provides benchmarks for preventing and treating mental disorders, as well as promoting mental health in the workplace.

Psychologist Dele Akinyemi is of the opinion that mental health and wellbeing policies also promote greater wellbeing at work. Having a happier, mentally healthy workforce has many benefits for employees and business owners.

“Happy employees who aren’t suffering from workplace stress are less likely to leave your company to work elsewhere. Improving and supporting mental health in the workplace means your staff will be happier and you’ll see retention rates soar. This can also help to improve your reputation as an employer when recruiting new staff”.

Despite this admission, the sad truth remains that a lot of people are struggling with the nature of the environment that has been created in the workplace. Hence, the need for corporate organisations to actively give support to their employees. Once psychological safety is restored, employee productivity and engagement are guaranteed to increase.

(This post was originally published on the Guardianlife Magazine on 13th March 2022) https://guardian.ng/life/uncovering-the-underlying-toxic-workspace-culture/